You are here: Home / Archives for Soccer 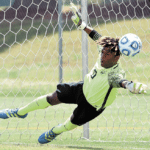 By Lee Davis The Over the Mountain area once again showed its strength on the soccer field this past weekend as no fewer than three teams won state titles and two others were runners-up in the Alabama High School Athletic Association Championships, played at John Hunt Park in Huntsville. Oak Mountain claimed its third consecutive Class 7A crown with a pressure-packed 2-1 … END_OF_DOCUMENT_TOKEN_TO_BE_REPLACED

By Lee Davis The Over the Mountain area showed its domination of Alabama soccer in the state championships in Huntsville last weekend. Three area teams – Oak Mountain boys, Vestavia Hills girls and John Carroll Catholic girls – claimed blue trophies at the Rocket City’s John Hunt Park. The Altamont School’s boys team finished second in its bid for a title. In Class 7A … END_OF_DOCUMENT_TOKEN_TO_BE_REPLACED