You are here: Home / Archives for Southmont Development/Morgan Properties 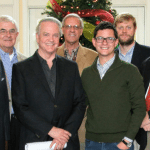 By Lee Davis The time was the mid-1960s. Lyndon B. Johnson was president of the United States, and the country was starting its final drive to put human footprints on the moon. About that same time, a Birmingham developer with a vision was putting his own footprints in a community by purchasing a dairy farm. The developer was Robert Morgan and the farm, called The Bearden … END_OF_DOCUMENT_TOKEN_TO_BE_REPLACED