You are here: Home / Latest Posts / View From the Top: 1920s Vestavia Hills Home Transforms to Suit Today, Maintains Memories of the Past

Some of the oldest homes in Vestavia Hills dot Shades Mountain, built well before the city’s incorporation in 1950.

The area was first established in the late 1800s by former two-term Birmingham Mayor George B. Ward, who built his Greco-Roman-inspired “Vestavia” estate where Vestavia Hills Baptist Church now stands.

A wave of people built grand homes along Shades Crest Road and Vestavia Drive in the mid to late 1920s.

When a Southern Colonial-style home on Vestavia Drive, originally built in 1929, came on the market in early 2013, it hadn’t had a new owner in 50 years.

When a young husband and wife, married in 2009, purchased the home in 2013, they were in love with the location. They had kept a close watch on the street, waiting for a home to go on the market.

“We just thought that it had really good bones and fell in love with it,” said one of the homeowners.

The late ‘20s home had been renovated when it was purchased in the ‘60s, but it maintained some of those less-appealing qualities of its origins – asbestos, plaster walls, not a friend to WiFi and a floor with nearly every room closed off from the rest by a door.

Enlisting the help of builder Philip Woods, the couple embarked on a three-year mission to breathe new life into the house, bringing it into the modern age while resurrecting some of the home’s original charm that was lost to the ‘60s.

The house was completely gutted, while the front facade and the front porch were maintained.

“We basically took it down to the studs and then put it back in the same way,” the homeowners said. “The trims look the same as they did before.”

Before renovations, almost every room had a door, shutting off the flow of traffic through the home. In addition, the kitchen was small.

“We wanted to keep with the original look of the house, which was very traditional,” the homeowner added. “So, we just updated everything to work with today’s style of living.”

An addition to the back of the house on the main level and in the basement gave room to create a larger kitchen, main-level master suite and back porch.

To support the opened pathway throughout the house, Mary Finch of McCollister and Company created an interior design plan based on warm neutrals. Foregoing stark white, the walls and ceilings feature various warm shades of off-white, with pops of color introduced through furnishings. It’s a timeless look, according to the owners.

The focal point as you enter is the staircase. The banister at the bottom was replaced, but hints of the original were maintained upstairs.

A coat closet and breakfast room were turned into a butler’s pantry that connects the dining room to the kitchen. To the right of the room, additions included closing in a screened in porch and creating an office space and a bathroom.

The space leads out to an added breezeway that connects the home to the new multi-car garage that houses the family’s vehicles and collection of vintage cars.

“This is my favorite room,” one of the homeowners said while making her way into the kitchen.

Light blue-grey cabinetry extends along the back wall, with windows providing views of the new back patio and the garden below.

Countertops were kept a neutral tone of stone while the cabinets conceal all shelving and most appliances, save the cooking range.

It was important to make the kitchen one of the largest rooms in the house.

“That’s how everyone lives today,” the homeowner said. “We live out of our kitchens.”

When the homeowners are entertaining, traffic easily flows to the main living room through a breakfast nook with more cabinetry along the back wall to create an extension of the kitchen.

The homeowners created a new master suite that juts off from the living room, replacing what had been a master suite upstairs.

A laundry room was added off the living room, just outside of the doorway to the bedroom.

The master bath is filled with neutral tiles and a sleek, modern soaking tub that is a statement piece in the room. 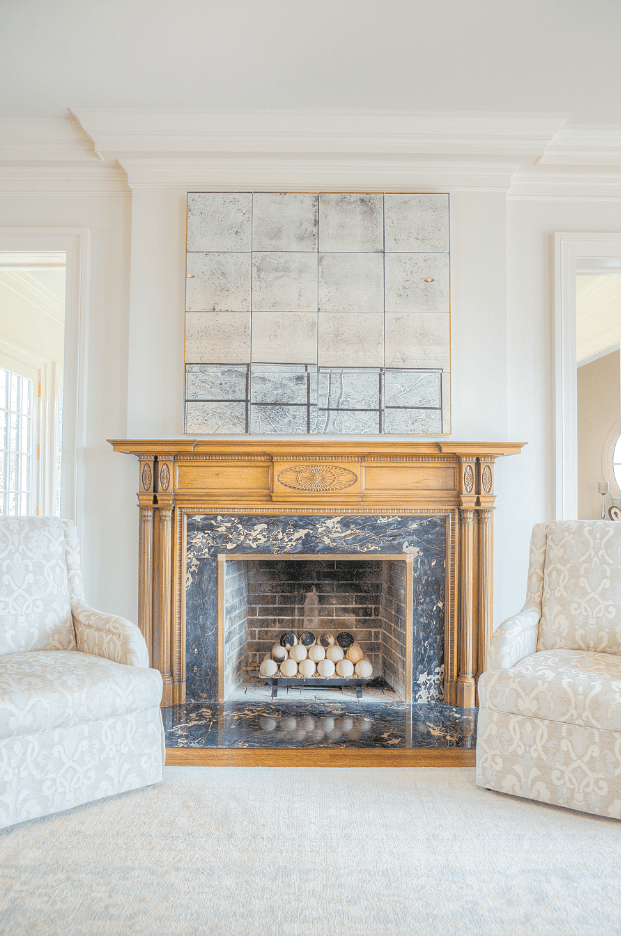 The mantle over the fireplace and the marble surround are both original to the home.

“It was broken in pieces (during the renovation) but they put it back together,” the homeowner said.

Above the mantle is a flat-screen television, which Finch wanted to give the homeowners the ability to hide.

While staying at a hotel, the homeowners were inspired by a bi-fold print that covered a television. A custom piece was made for their home using antiqued mirror panels rather than prints.

A sunroom off the living room had seen better days when the homeowners bought the house.

In true ‘60s style, the previous homeowner had put up busy wallpaper along the walls and on the shutters that covered the rooms’ many windows, along with drapes featuring an identical pattern.

The room is now neutrals and devoid of window treatments, allowing light to shine across the space and flood across the room’s original fireplace.

A framed, black-and-white photograph of a gorilla rests above the mantle, purchased because it reminded homeowners of a gorilla trekking excursion they took while traveling in Africa.

Back to the foyer and up the stairs, four bedrooms can be found in the four corners of the top level of the home, each now featuring an en suite bathroom.

Two rooms on the level originally shared a sleeping porch, which was later converted into a sitting room by the previous owner.

Sleeping porches were highly popular in the 1920s as a way to beat the Southern heat.

In addition to having many windows to create a cross-breeze, these rooms were thought to have health benefits. Germs still were not fully understood at the time, but it was theorized by doctors that sleeping while exposed to the outdoors was beneficial to the immune system. Specifically, they hoped it would help combat a person’s susceptibility to tuberculosis, which was one of the leading causes of death in this time period.

In the present day, there isn’t too much use for the room, with air conditioning taking care of the summer heat. So, the current owners converted it to a closet and craft room and used some space to split up the original Jack and Jill bathroom.

In the basement, the history of the house is at its most unavoidable.

When descending the staircase into the basement, visitors are faced with a dormant coal-burning furnace.

To the left of the furnace is a short wall that sections off a space where coal would be stored and then shoveled into the furnace.

Back in the day, a truck would pull up to the porch and dump the coal into the basement area through a small hole in the wall.

Now the area provides the perfect amount of space for a custom shuffle-board table.

The work of shoveling coal into the furnace would heat the house through a series of ducts connected to smaller radiators, but it also would carry coal dust throughout the house. The radiators have been removed, but the main furnace is nearly impossible to remove because of its weight and location. So, the main structure of the furnace was cleaned up with some charcoal grey paint and now acts as a piece of art in the room.

One of the must-haves for the new homeowners – second only to the need for more kitchen space – was a large state-of-the-art wine cellar, found just past the basement stairs. It features copious amounts of shelving and a tasting area, housing the family’s extensive wine collection.

Out to the Lawn

Off the basement is a newly added media room filled with University of Alabama memorabilia and a hall, which leads to the backyard.

The lawn has been transformed into a formal English-style garden, with pebble pathways leading away from the house, weaving around a small lawn, past an outdoor dining table and finally to the guest house.

The driveway along the left side of the house slopes down toward the guest house, revealing the structure’s original purpose as a garage.

The two bays for cars were replaced with windows by the previous owner, who transformed the space into a multipurpose room.

“It was a kids hang-out spot,” the homeowners said. “Then there was a spiral staircase leading upstairs, where there was a big room and a bathroom.”

Because the staircase was so narrow, there wasn’t a good way to get furniture to the room upstairs. Thus, the new homeowners decided to remove the spiral stairs and make the upper and lower levels two separate spaces.

The lower level of the guest house now serves as a study. Dark wooden bookcases fill an entire wall, fully stocked with books and knick-knacks. A seating area with leather chairs looks as if it could have been pulled right out of an English castle.

Stairs were then added on the back of the guest house to a new mother-in-law suite above, which is almost a polar opposite to the downstairs. The suite upstairs is light and airy, featuring neutrals akin to those found throughout the main house.

Though there isn’t a kitchen, there is a coffee cart table made of light wood that even includes a retro-looking Igloo mini-fridge.

Beyond the guest house, lawns and main house, the home extends to the opposite side of Vestavia Drive with a lawn situated on an overlook.

The space originally was filled with brick pathways, which were lifted and cut in half to replace the red tile on the main home’s porch and the former screened-in porch space.

“There was a fountain and things of that nature. We took all of that out, except for the gazebo, and put in a bocce ball court,” the homeowners said.

The space has seen various engagements, one hosted just last week for a family friend.

The overlook across the street also provides the homeowners with a view of landscape that has changed, but mountains that have stood tall since the home was built almost a century ago.