Newlyweds Sydne and Jeffrey “JJ” Shaffer met while attending college at Auburn University. Both were involved in collegiate athletics, Sydne being a softball player while JJ played baseball.

Sydne moved to Birmingham right after graduation, while JJ remained in Auburn to pursue a master’s in business before making the same move.

On Jan. 18, 2020, under the guise that they would be celebrating a year of living in Birmingham, Jeffrey made a reservation for dinner at Gianmarco’s, within walking distance of Sydne’s home.

“My best friend flew in, and while we were at dinner, she and her husband decorated our backyard with twinkle lights and music,” she said.

When they returned from dinner Jeffrey proposed.

“I had planned the whole (wedding) in about three weeks,” Sydne said. “Things were slow at work and I was just on it.” Little did she know, the plans would dissolve in just a matter of months.

Once the longevity of the pandemic was realized, the couple and their families had to discuss what to do about the wedding they had envisioned.

“Our previous vendor was being super strict on their rules and guidelines, which we totally understood,” she said.

What the couple wanted had been steadily changing during the shutdown, but what they knew was that they wanted to keep their original wedding date.

“We had been dating for six years and we knew we were getting married, whether it was just us and the pastor, us at the courthouse or in our parents’ backyard. That was it.” 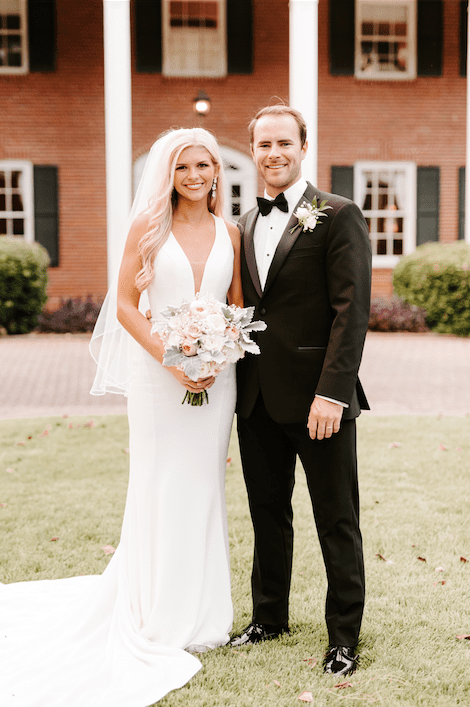 “The venue we initially picked was completely indoors,” she said. “Late June, we re-planned the whole thing and switched to the Hoover-Randle Home.”

Originally, she had been against the idea of an outdoor wedding in the middle of August because of the weather.

On Aug. 22, 2020, the couple wed at Mountain Brook Community Church in a ceremony officiated by Ben Telfair, followed by a reception at the Hoover-Randle House.

“For some reason, it was 70 degrees on a weekend in August. It only rained on the ride back from the church to the reception, just a tiny little shower. It ended up being perfect.

There were also some special surprises that the restructuring offered.

While they were quarantining before the wedding, Sydne and her father decided to choreograph a fun father-daughter dance. It was an act that was quite out of character for her very reserved father, whom Sydne said rarely smiles in pictures, let alone breaks out into dance.

“We didn’t tell anyone,” she said. “My husband didn’t know, nobody knew that we were doing it. Probably for the first hour and a half of the reception, people could not get past the fact that my dad had just done that. We’ve got a lot of good candid shots of him dancing and we have the video of it.”

A benefit to switching their venue, the couple’s French bulldog and golden retriever both got to be a part of the day, posing for pictures alongside the bride as she got ready.

The bride’s parents are Denis and Kelly Waldrop of Springville.

She was given in marriage by her father and wore a crepe silhouette gown with an open back and button detailing, enhanced with a small belt by Essence of Australia.

The groom’s parents are Jeff and Jenny Shaffer of Auburn.

Following a wedding trip to St. Lucia, the couple reside in Homewood.