When Mountain Brook cardiologist Dr. Jan Skowronski heard about the unrest happening in Ukraine, he knew he had to do something.

On March 14, Skowronski announced the launch of Fortuna Clinical Foundation for Ukraine, an initiative that supports medical institutions in Ukraine as well as mothers fleeing the war with children.

In an informational video, Skowronski and his team encouraged viewers to donate.

“All of my ancestors lived in the area of today’s Ukraine, a beautiful land where Ukrainians, Poles and Jews lived peacefully for centuries,” Skowronski said in the video. “We cannot sit idle.”

Being from Wroclaw, Poland, Skowronski holds this cause close to his heart. Although the foundation was established with a separate mission, Skowronski and his team quickly shifted gears upon hearing about the invasion and destruction of Ukraine.

“The original purpose of the foundation was for medical education,” Skowronski said. “But given the circumstances and the situation, we had to use it as a vehicle to help Ukraine. I knew I had to do it when the first rockets landed.”

“I am unhappy that I had to do it, but I feel called to help. It has been absolutely revolting what is happening in the world in the last three weeks.”

On March 12, Skowronski sat with his phone and sent a link to the video to all of the contacts he recently had spoken to.

Skowronski, who also is chair of Icarus, a global cardiovascular conference for medical education, has two hopes for his foundation in the future – education and support.

“First, I want to educate people on why they should care about a war happening thousands of miles away,” Skowronski said. “Additionally, the foundation serves as a way to help people in need. These people are in dire (straits), and funds have to go out quickly. Time is everything.” 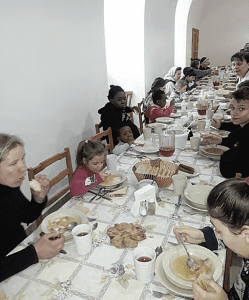 During the interview, Skowronski took a phone call from Sister Julia, a nun in Ukraine.

The nun, who resides in southern Ukraine, told Skowronski she and others were coming out of the bunker after a mass of Russian rockets darted through the sky just above them.

“There is a bombardment somewhere,” Skowronski said as he translated the call. “She said she has never experienced anything like this.”

Skowronski spoke with Sister Julia on March 16 via video chat about the designation of funds.

“We are funding a transport of medical goods from Poland to Ivano-Frankivsk that will be departing soon,” Skowronski said.

He said the funds will be designated to a local hospital in Buchach, 10 miles north of the refugee center, for medicines and single-use supplies.

In addition, funds will be used to provide gas and to build a playground for refugee children, as the center found itself with a lot of small kids.

“The nuns have no need for hoops and swings, but the refugee children do,” Skowronski said.

As of now, Fortuna Clinical Foundation provides support to a refugee center in Yazlovets in southern Ukraine, where a 17th century palace has been turned into a center for mothers with children and orphans.

On the morning of March 17, donations totaled more than $40,000 – money raised just from Skowronski’s contacts.

Skowronski attended medical school for interventional cardiology in Poland and completed his rotations in London and Chicago.

When asked why he chose his profession, Skowronski stated, “It’s all about saving lives.”

“It’s a neat thing to be able to save someone’s life,” Skowronski said. “We just saved one this morning. He had a heart attack. We took him to the cath lab, and he will probably go home tomorrow.”

He moved to Birmingham after spending 13 years in the Chicago, Illinois, area working with OSF St. Anthony Medical Center.

“A good friend of mine is one of the fundamental names of interventional cardiology,” Skowronski said. “His name is Gary Roubin, and he worked at Brookwood. When he approached me and asked if I would move to Birmingham, I thought he was out of his mind. But he encouraged me to come visit, and I liked it.”

Skowronski has now been with Brookwood and Cardiovascular Associates for four years.

For more information or to donate to Fortuna Clinical Foundation, visit fortunaclinical.com.

Have some exciting OTM NEWS? Submit YOUR NEWS
Wednesday, July 6, 2022